Wine is a long game. It often takes a generation or more to learn the vagaries of a vineyard site. It takes a decade for changes in farming and vinification to show themselves in the end wine. Even the most experienced winemakers need more time to achieve their goals.

Christian Moueix got his first taste of California while studying at the University of California, Davis, in the late 1960s. He returned to his native Bordeaux, working with his father, Jean-Pierre, in the family business, which included a burgeoning négociant operation and a cluster of properties they owned and managed. Today, the roster of Moueix’s Bordeaux interests is an all-star lineup: châteaus such as Trotanoy, La Fleur-Pétrus and Hosanna in Pomerol and Bélair-Monange in St.-Emilion.

His career in Bordeaux included the introduction of green harvesting (dropping fruit to reduce yields and increase quality), a technique that was initially met with derision by many of his fellow vignerons but which today is de rigueur in nearly every major winegrowing region. All of this, including a lengthy stewardship of famed estate Pétrus, took Moueix time.

Over the years, Moueix returned often to California, drawn by the allure of grapegrowing and winemaking that could be done without the constraints of France’s formalized AOC system. In 1982, he became a partner in Napanook Vineyard, which became the foundation for the debut of Dominus Estate the following year. In 1995, he bought out his partners to become the sole owner.

Moueix brought Bordeaux techniques to Dominus, along with its winemaking philosophy. Over time, he learned that some things between the two regions correlated, while others didn’t. Moueix wanted to make a Napa Cabernet without irrigation, as is the law in Bordeaux. The idea is to force the vine roots to grow deeper in search of moisture and, most importantly, to conserve water.

“That’s the first step of sustainability,” said Moueix in 2019, when presenting his 2010 Dominus to a full house of New York Wine Experience attendees. With Napa now facing a severe and yearslong drought, Dominus’ vineyard is humming along as a finely tuned machine while other sites struggle to maintain a healthy balance between crop load, vine health and economic viability. Moueix’s decision to dry farm, a pledge he made from the beginning of Dominus, may prove to be his most prescient choice.

As for the ideas that didn’t work out, Moueix admits he came to Dominus with a Merlot-first approach, a rubric born of his success in Pomerol. But time, and a willingness to adapt in pursuit of excellence, led Moueix to shift away from the variety at Dominus; today, there is no Merlot in the vineyard. The final blend of Dominus is typically at least 90 percent Cabernet Sauvignon, with small amounts of Cabernet Franc and Petit Verdot.

Working with winemaker Tod Mostero, Moueix’s career hits another high point with this 2018 bottling, from another drought year. While there was a water deficit, the rain that did fall came at the right times, including a rainy winter in 2017 that allowed the soil to replenish itself heading into the 2018 growing season.

“The 2018 season saw warm but very steady temperatures, without heat spikes,” says Mostero. “The ripening was even, there was no sunburn and no dehydration. There was no stress, no rush to do anything, no emergency work.”

The evenness of the season shows in the 2018 Dominus, which captures the essence of the vintage perfectly, with vivid and dense yet restrained fruit carried by evident yet fine-grained and well-integrated structure. The wine brims with a deep, warm loamy edge and is backed by cast iron accents on the finish—a compelling display of great terroir.

It’s the result of Moueix’s more than 50 vintages of experience on two continents, producing wines from differing terroirs. It’s a wine that comes from taking time, and a wine that will require time in the cellar. It’s a benchmark for the region and the vintage. Congratulations to Christian Moueix and his team for producing the Dominus Estate Napa Valley 2018, Wine Spectator’s Wine of the Year for 2021. 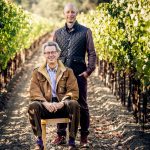 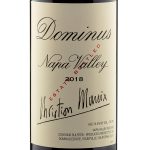 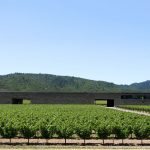 This is tightly packed, with sleek, pure, driven notes of cassis, plum reduction and blackberry puree allied to an iron spine, while subtle alder, juniper, sweet bay leaf and tobacco notes peek in throughout. Very fine-grained, but impressively sturdy in feel, with a long, lingering note of iron piercing the finish. For the cellar. Best from 2024 through 2040.—James Molesworth

The Beauty of Cabernet

Amid a string of strong vintages for Napa Valley Cabernet Sauvignon, 2016 alone stood out from the pack with its racy, ageworthy reds—until 2018 arrived, nudging it aside and setting a new modern benchmark for the region. A slow ripening season helped create rich, dark and detailed Cabernets that clearly transmit their terroirs. WineSpectator.com members: Discover Napa's leading Cabernets and blends among the nearly 800 reviewed for Wine Spectator's annual tasting report.

At Dominus Estate, a Green Oasis in Drought-Wracked Napa Valley

On a trip to Napa, Wine Spectator senior editor James Molesworth tasted promising 2018 Cabernets at Dominus Estate. Learn more about the Yountville winery, how it farms its vineyards and what that meant in a dry vintage.

In the Vineyard at Dominus: Dry Farming with Tod Mostero

Drought-resistance is immeasurably valuable in California, and dry farming is one of the most effective, if difficult, techniques. Dominus Estate director of viticulture and winemaking Tod Mostero explains in this video.

At Wine Spectator's 2019 Wine Experience in New York, the Right Bank Bordeaux champion and Napa vintner celebrated his 50th year in the wine industry—by sharing his outstanding 2010 Dominus Estate with the audience!

At the 2021 New York Wine Experience, Christian Moueix, who owns a second Napa property, presented his outstanding Ulysses Napa Valley 2015 in a showcase of elite California Cabernets. Learn more about this young project!