A small, previously little-known vineyard in Napa Valley’s Oakville District has produced a wine that epitomizes the modern style of Napa Cabernet.

Au Paradis is the newest offering from Peter Michael Winery. This producer’s stellar reputation was built on wines grown in Sonoma County, but the 2012 bottling of Au Paradis proves its deft touch extends to Napa. The wine speaks of its site, farmed and vinified to perfection by an experienced team capturing the brilliance of a bountiful vintage.

The vineyard was planted in 1988 by Kal and Dorothy Showket. The couple bought the sloping hillside parcel off Silverado Trail next to Dalla Valle. The Showkets made a small amount of wine but sold most of their grapes to the likes of Caymus, Shafer and Dalla Valle before an illness in the family led them to sell the vineyard to Peter Michael in 2009.

Michael, a Britain-born tech tycoon, had looked at land in Napa Valley in the 1970s but settled instead in a remote corner of Knights Valley due north of Napa. There he had the good fortune to discover a gold mine of a property and has enjoyed tremendous success with a stable of estate-grown Chardonnays and the Bordeaux-inspired red called Les Pavots.

But he never put Napa out of his mind. When the Showket property came up for sale, Michael seized the opportunity.

Cabernet in Oakville dates to the 1880s, grown first in what is still known as To Kalon Vineyard, made famous by Robert Mondavi. The list of great Cabernets from Oakville reads like a who’s who: Mondavi, Opus One, Heitz Martha’s Vineyard, Harlan Estate, Joseph Phelps’ Backus Vineyard, Screaming Eagle and Schrader Cellars are among the better known.

The Showkets’ Cabernets from their site were often exceptional, and Russell Bevan of Bevan Cellars took quality up a notch with a run of classic-rated Showket Vineyard Cabernets from 2007 to 2009.

Au Paradis, as Michael renamed the vineyard, lies in the eastern hills of Oakville. The site, distinguished by its rocky, reddish-brown soil, faces west and south. Its midvalley location allows for the steady heat accumulation that Cabernet loves, along with exposure to afternoon breezes from the south and San Pablo Bay.

Michael’s first shot at making an Au Paradis Cabernet came in 2010, but the heat wave at harvest surprised his winemaking team and they decided to skip the vintage, opting to start with 2011; the resulting wine (90 points, $195) was a success in a damp, spotty year. The 2012 bottling validates all the excitement surrounding the vineyard and the vintage. The wine is a classically structured Napa Cabernet, and the lavish use of new French oak adds both a graceful textural allure and heightened aromatic presence.

Nick Morlet, winemaker at Peter Michael, who has made the Knights Valley Les Pavots for a decade, also believes Au Paradis is perfect for Cabernet. The soil and exposure ensure even ripening, he says, and the heat is just right. “Cabernet likes to sweat,” Morlet observes. When the sun sets, the cooler air from San Pablo Bay mitigates the temperature, keeping balance in the grapes.

This is the fifth time in the history of the Top 100 that a Cabernet from Napa Valley has been selected as Wine Spectator’s No. 1 wine. The quality of Napa Cabernet has been accelerating over the past few decades, with many of the improvements farming-based. A combination of soil, climate and precision viticulture distinguishes the best vineyards.

As a textbook example of the way passionate investment, technical skill and an outstanding vineyard can create compelling wines, the Peter Michael Cabernet Sauvignon Napa Valley Au Paradis 2012 is Wine Spectator‘s 2015 Wine of the Year. 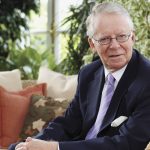 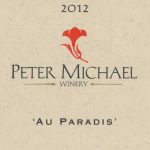 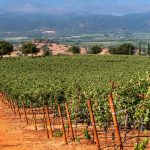 Deliciously pure and supple, with explosive dark berry and red berry flavors and a silky, polished texture. The tannins become more evident midway through, with a gravelly crushed rock profile that adds a dimension of dust and mineral. Drink now through 2030.—James Laube

How did an English gentleman end up in the mountains of Sonoma making some of California's best Cabernets, Chardonnays, Pinots and more? Here's the story behind the tech millionaire–turned–vintner who became a dominant player in Sonoma, Napa and beyond.

At the 2013 New York Wine Experience, Peter Michael poured a range of wines culminating in the Au Paradis from its inaugural vintage, 2011. In this video on WineSpectator.com, he talks about why, after making his name in Sonoma, he chose to get into the Napa scene, plus his (very) long-term plans for the business.

Our Recipe Search features more than 900 wine-friendly dishes. Try this wine, or others like it, with Roasted Beef Filet With Tomato-Cumin and Avocado–Pumpkin Seed Salsas.