Merlot is back, and deservedly so. Despite the comic derision heaped on the variety in the popular film Sideways, Merlot can make extraordinary wines in California. Duckhorn’s Three Palms bottling in the excellent 2014 vintage is ample proof.

Duckhorn Vineyards was founded in Napa Valley in 1976, and Merlot has been its specialty from the start. Since its first vintage, in 1978, the winery has tapped one of the valley’s most storied vineyards: Three Palms, named for the trio of palms that grow in its midst.

San Francisco socialite Lillie Hitchcock Coit owned the site in the late-19th century and planted the original palms. But for Margaret and Dan Duckhorn, Three Palms was the anchor that helped them build one of Napa Valley’s most accomplished wineries.

Dan Duckhorn had been inspired to make Merlot after a trip in the mid-1970s to Bordeaux, where he was impressed by the grape’s approachability in comparison to the sometimes tannic characteristics of its sister Bordeaux variety Cabernet Sauvignon. The Duckhorns rode the boom in Merlot to financial success before the turn of the century, and weathered the fallout that followed the 2004 release of Sideways.

Their faith in the grape has been richly rewarded. The classic-scoring Duckhorn Merlot Napa Valley Three Palms Vineyard 2014 is Wine Spectator’s 2017 Wine of the Year. The 2014 Three Palms is an elegant expression of Merlot, loaded with red fruit and spice flavors that are supported by medium-grained tannins.

Continuity has been the cornerstone of Duckhorn’s success, not only with the vineyard but also with its winemaking and management team. CEO and president Alex Ryan, 51, began working at the winery in 1988. Renée Ary, 41, started in the cellar, located off the Silverado Trail north of St. Helena, in 2003 and has been head winemaker since 2014, making this Wine of the Year honor an auspicious start to her tenure in that role.

For Ary, the Three Palms site is a somewhat counterintuitive one for Merlot. It is one of the warmer areas in the valley, located just south of the town of Calistoga, whereas Merlot is typically grown in cooler conditions. Ary credits Three Palms’ pedigree to the rocky volcanic soils formed by an alluvial fan that forces the vines to set down deep roots, resulting in grapes bursting with concentrated fruit flavors.

“Three Palms is a unique site for Merlot,” Ary explains. “It’s warm and rocky, and you really have to be on top of things there because Merlot is susceptible to hydric stress,” which she manages through timely applications of water from drip irrigation.

And she respects the finicky nature of Merlot, from spring, when it is prone to poor fruit set, to harvest, when it can be damaged by rain and moisture because of its thin skin.

The 2014 Three Palms comprises 86 percent Merlot, 8 percent Cabernet Sauvignon, 4 percent Malbec and 2 percent Petit Verdot. All the fruit for the wine comes from the 83-acre vineyard, 50 acres of which are planted to Merlot.

The 2014 was aged 18 months in French oak barrels, 75 percent of which were new. That regimen represents a shift by Ary from protocols that formerly saw 95 percent to 100 percent of the wine aged in new oak. “I’ve refined the barrel program quite a bit to polish the tannins up yet still give the wine the structure to age,” she says. Another practice Ary has instituted is to pre-soak the barrels in water to leach out green tannins from the oak.

The Duckhorns started their winery on a shoestring, financed by a small group of investors. They left day-to-day operations of the business in 2007, selling a controlling interest to GI Partners, a private equity firm based in Menlo Park, Calif., in a deal that valued their Duckhorn Wine Company at $250 million.

During its tenure, GI Partners invested $70 million in estate vineyard purchases, including the acquisition of Three Palms in 2015. It was bought from longtime owners John and Sloan Upton, brothers who originally planted the grapes in 1968; starting in 2011, Duckhorn had been the exclusive buyer of Three Palms grapes from the Uptons.

Duckhorn got a new owner last year, another Bay Area–based equity investment group, TSG Consumer Partners. Besides the namesake winery, Duckhorn Wine Co. also owns Goldeneye, which specializes in Pinot Noir; Migration, a Chardonnay label; Decoy for value-priced bottlings; Paraduxx, a lineup of Napa-grown red and white blends; and an expansion into Washington state Cabernet with Canvasback.
Overall, Duckhorn Wine Co. makes about 700,000 cases of wine a year. And this past summer it purchased Calera, a Pinot Noir pioneer on California’s Central Coast.

Tradition and innovation; continuity and transition. Duckhorn is a wine company on the move, built on Merlot grown around three of the most famous palm trees in the Golden State. 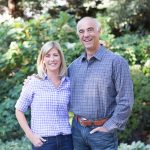 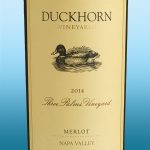 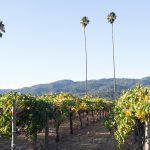 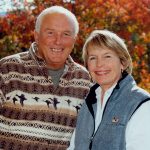 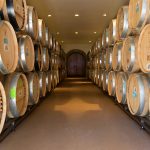 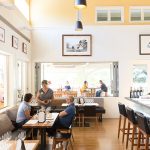 A powerful red, with concentrated flavors of red plum, cherry and boysenberry that are layered with plenty of rich spice and mineral accents. Touches of slate and cardamom make for a complex finish. Drink now through 2023.—Kim Marcus

California vintners, led by Duckhorn, are approaching Merlot with new energy. Find out how they're doing it.

Find a Great Match for Merlot

Our Recipe Search features nearly 1,000 wine-friendly dishes, including many options to match Merlot. Try this wine, or others like it, with this decadent recipe for Bacon Béchamel Mac & Cheese with Sharp Cheddar.

In 2016, the growing Napa-based wine company—which encompasses several other brands—took on a new majority investor. Get the full story on the deal.